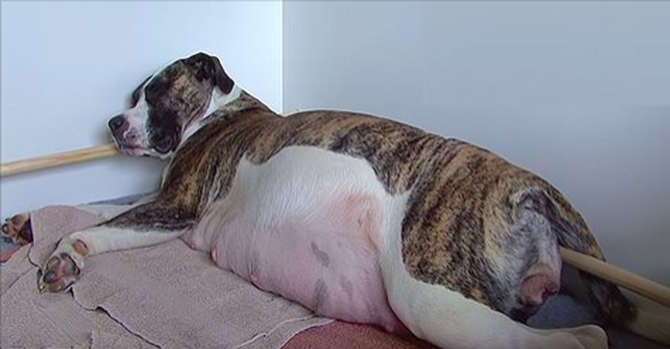 For the Staffordshire Bull Terrier, a three-year-old Diva, the first pregnancy turned out to be very difficult. The owners were only amazed, watching how their dog’s belly grows every day. By the end of the 59-day gestation period, the poor animal could hardly walk.

And when it became clear to people that their pet was about to give birth to offspring, they placed her on a comfortable bed, and they themselves prepared to help. Diva’s owners knew that large dogs brought more than one or two puppies at a time, but they were clearly not ready for such a large number of babies.

And Diva herself was very worried at first, not understanding what was happening to her. However, after the birth of the first puppy, the dog calmed down and concentrated on the process. Instead, the owners began to worry. Fortunately, everything ended well. Now the owners of Diva, in addition to the proudest mother, have as many as thirteen puppies!