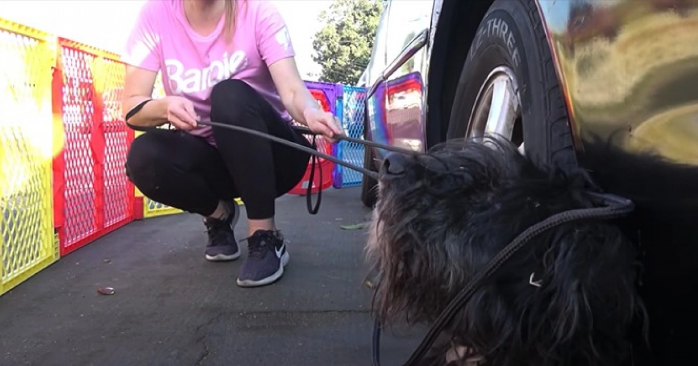 Hope For Paws, located in Los Angeles, USA, comes to the aid of homeless and abandoned animals in the area.

She was recently contacted by Mary Chatman, an animal welfare worker, about a young stray 3 year old dog. The poor beast was known to the locals for always living alone on the street.

A dog named Ziggy hid under cars to protect himself from the scorching heat of California.

So the rescue team armed themselves with capture equipment and set out to look for them. Rescuers found him curled up under a car. He was terrified and did not dare to come out of his hiding place.

So the Good Samaritans put up a protective barrier to keep him from escaping, and pulled him as gently as possible to get him to safety.

Ziggy didn’t trust people and didn’t know how to react to them. But when the vets started taking care of him, he relaxed.

His hair was shaved off, then he took a medicinal bath to get rid of the fleas. He was also identified, dewormed, sterilized and vaccinated. Finally, the volunteers provided him with a plentiful and balanced diet.

Then he had a completely new Olympic uniform.

The more time passed, the more Ziggy blossomed with his saviors. He was eventually adopted by a couple who were moved by his story.